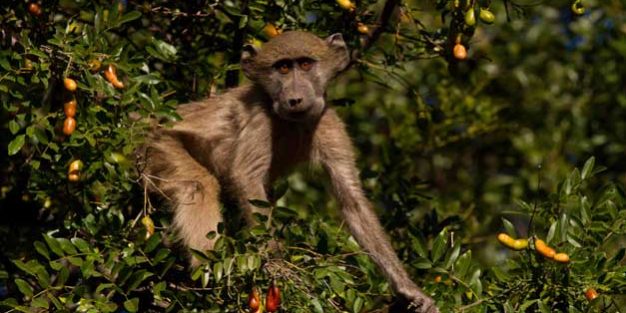 There’s not a day that goes by that Mashatu doesn’t – in shape or form – deliver spectacular game viewing. Baboons are still seen feeding, or rather, gorging themselves, on the fruit of the evergreen Mashatu trees. And although it’s not currently the best season for birding, we’ve enjoyed some wonderful sightings of our resident feathered species. The Lilac-breasted Roller and Little Bee-eaters are both frequently seen, as is is the the Kori Bustard, which also happens to be Botswana’s national bird, as well as the heaviest flying bird.

The more popular and sought after animals, such as elephants, lions, leopards and hyenas, have all obligingly shown face during game drive hours. A few days ago we spotted a young male leopard close to Scraper, and as he moved along the edge of a riverbed the entire bush literally erupted in warning calls from baboons, squirrels and Guinea fowl. It certainly made following this normally elusive cat a lot easier, as his presence was loudly announced as far as he went. Until darkness fell of course, then it was a different story altogether.

The weather is definitely getting warmer. The early morning game drives are still a bit chilly, but nothing like when the cold front made its way through here a couple of weeks back. With the days getting hotter, evenings around the camp fire are also becoming more enjoyable.