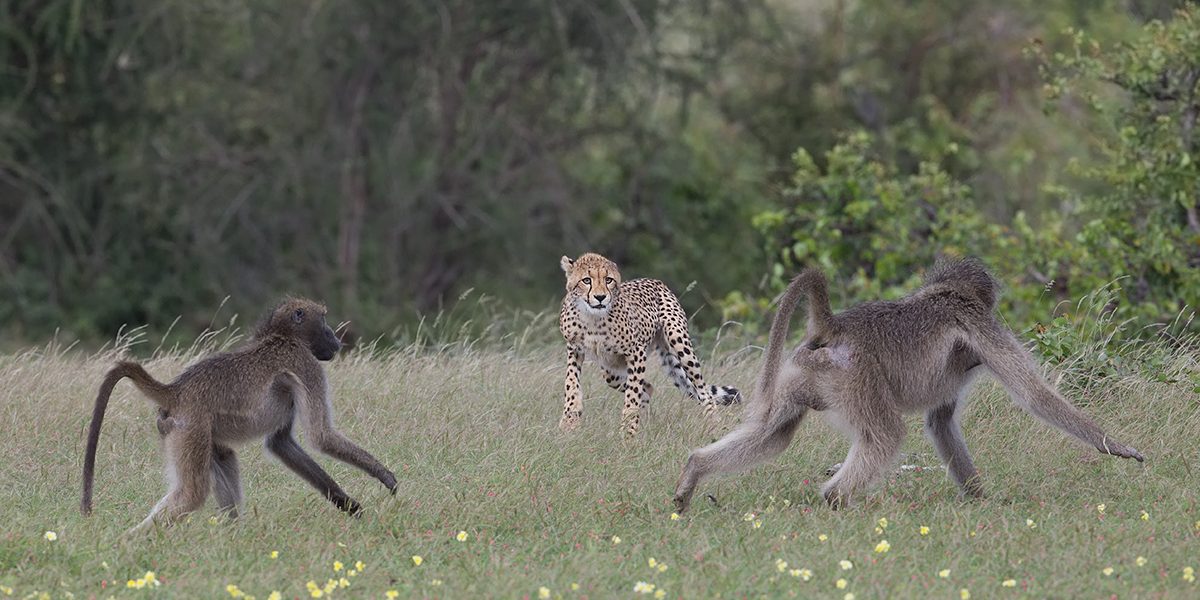 A few days before my departure for a 4 night stay at the Mashatu Game Reserve, I saw a Facebook posting of this very special cheetah family with four sub adult cubs. The cubs were about 15 months old and looked healthy. I was so excited and hoped that they would stay around for my visit as part of a photography workshop led by Greg du Toit. As it turned out, we saw the family every single day, although they were mostly relaxing in the company of each other for the first two days. Not discouraged, we kept checking on them on the third day and witnessed a failed attempt of a hunt. Exhausted, Mama retreated to the shade of a bush and was comforted by her cubs.

We were about to leave them when a large troop of baboons coming into view. The family hastily retreated and one of the cubs took off, but the remaining 3 cubs huddled with their Mama at the base of this bush. We feared for the worst.

Baboons showed aggression. The cub on the right rose up to meet the challenge.

Baboons attacking. Mama was fending off some baboons on the right side (out of the picture) while one of the cubs decided to take the matter in its hands and leapt out at the attacking baboons on the left.

The courageous cub drew the attackers away from the family and then turned and faced them. One of the cubs that fled earlier could be seen in the background.

Cub turned and was ready to take on two attacking baboons. The baboons were surprised by the courageous cub and decided to leave him alone.

Text and Photographs By: Loi Nguyen