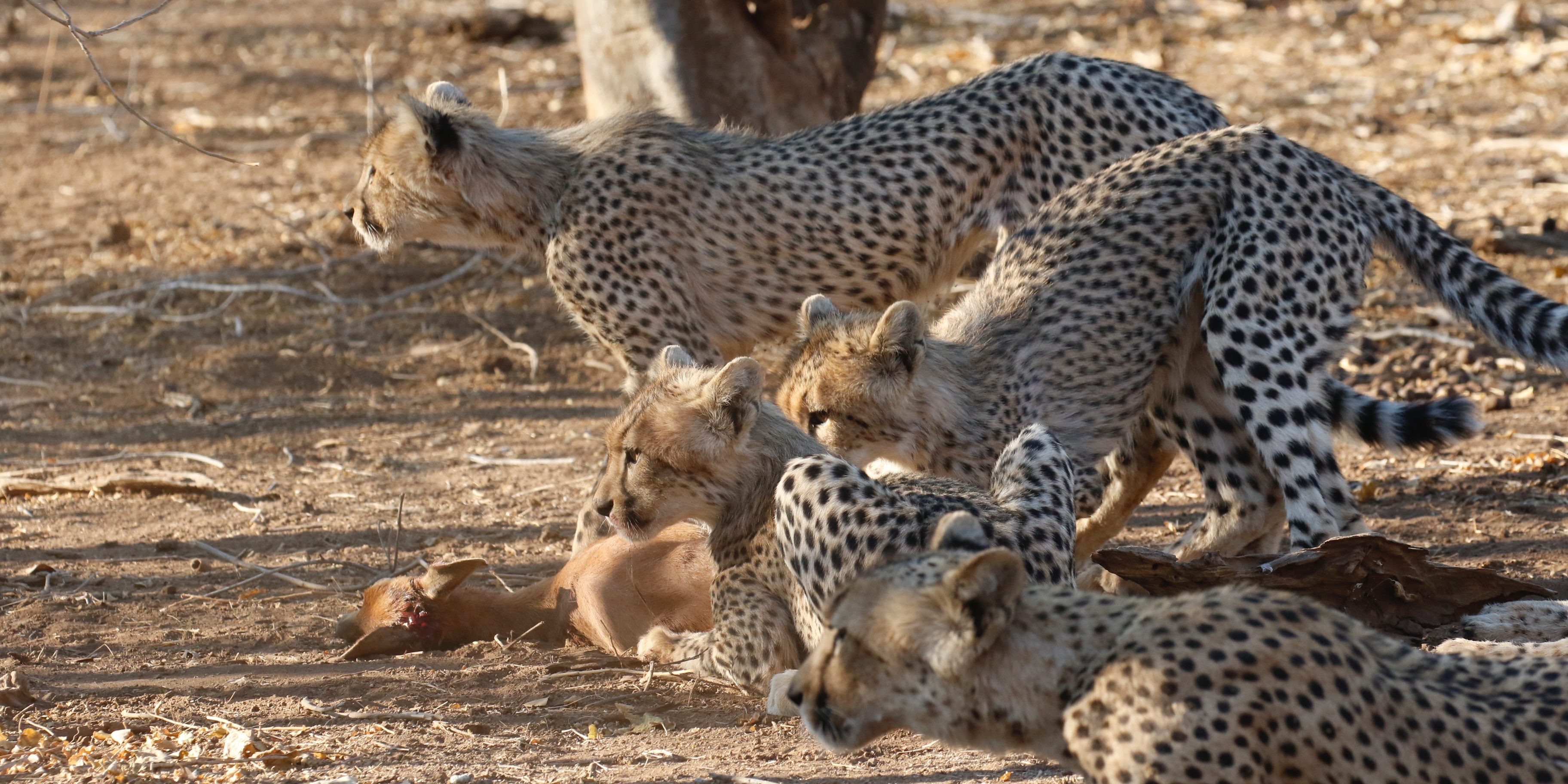 Guests often have a wish list of what they’d like to see in the wild, but nature is unpredictable and most often surprises us.

On a recent visit to Mashatu one of our guests, Susanne Baden, booked a week on our Photographic vehicle with the hope of getting good leopard photos.  We did have leopard sightings and a few photographic opportunities but the real stars of the show during Susanne’s week, were the cheetahs.

It all started early on the first morning when we came across a female cheetah and her four sub-adult cubs walking across an open area.  We decided to follow them for a while as we expected they may want to hunt.  There were no impala in sight so we were surprised when, without warning all, the cubs suddenly took off.  To our surprise we watched as they gave chase to three bat-eared foxes. Chaos ensued as the bat-eared foxes dodged and manoeuvred at great speed to get away.  Two of the foxes made it to their hole and one was left being chased by all four youngsters.  In a surprise move, the remaining bat-eared fox turned on the cheetahs and started chasing one of them.  In this moment of panic and confusion the bat-eared fox made a hasty dash for the safety of the den. 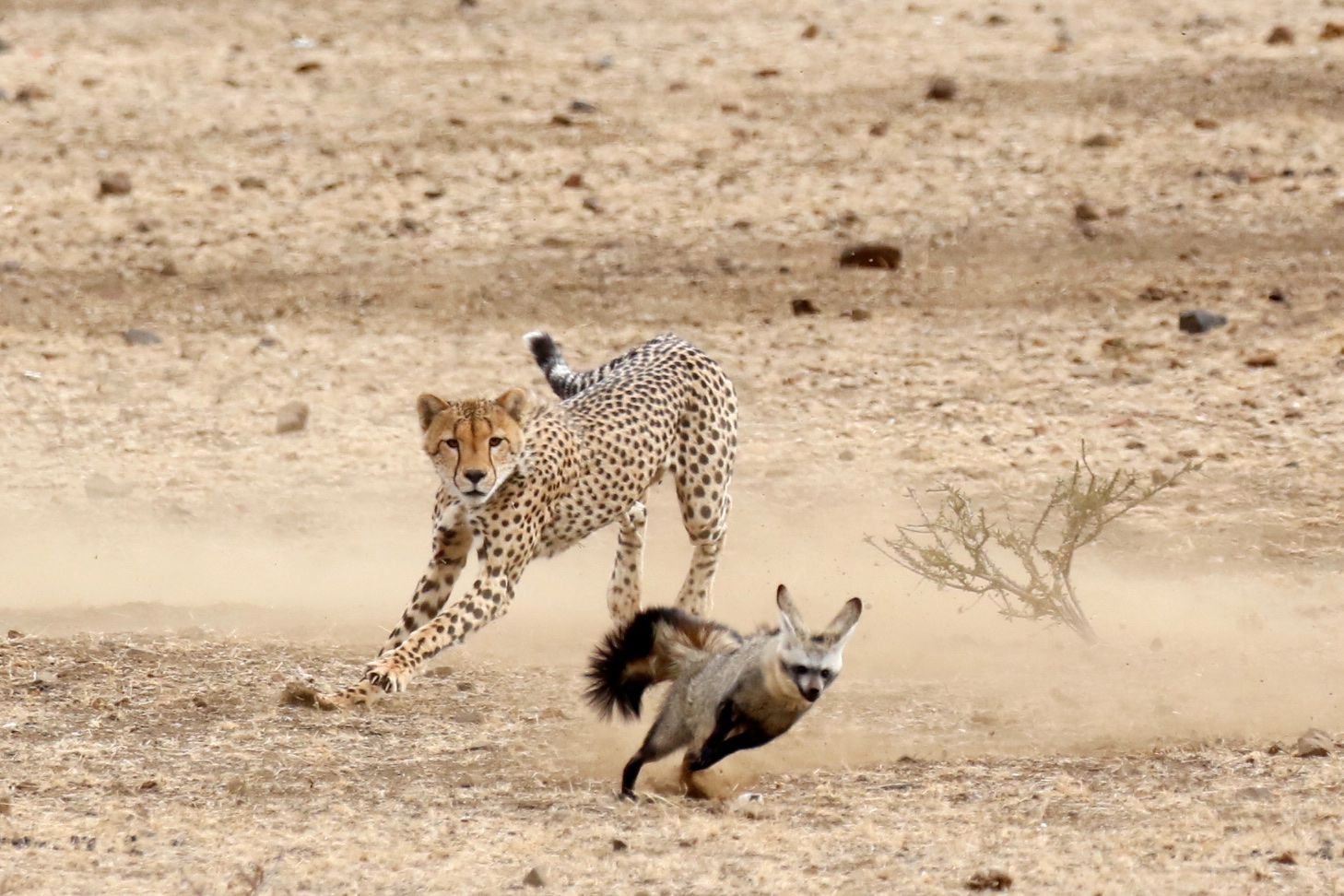 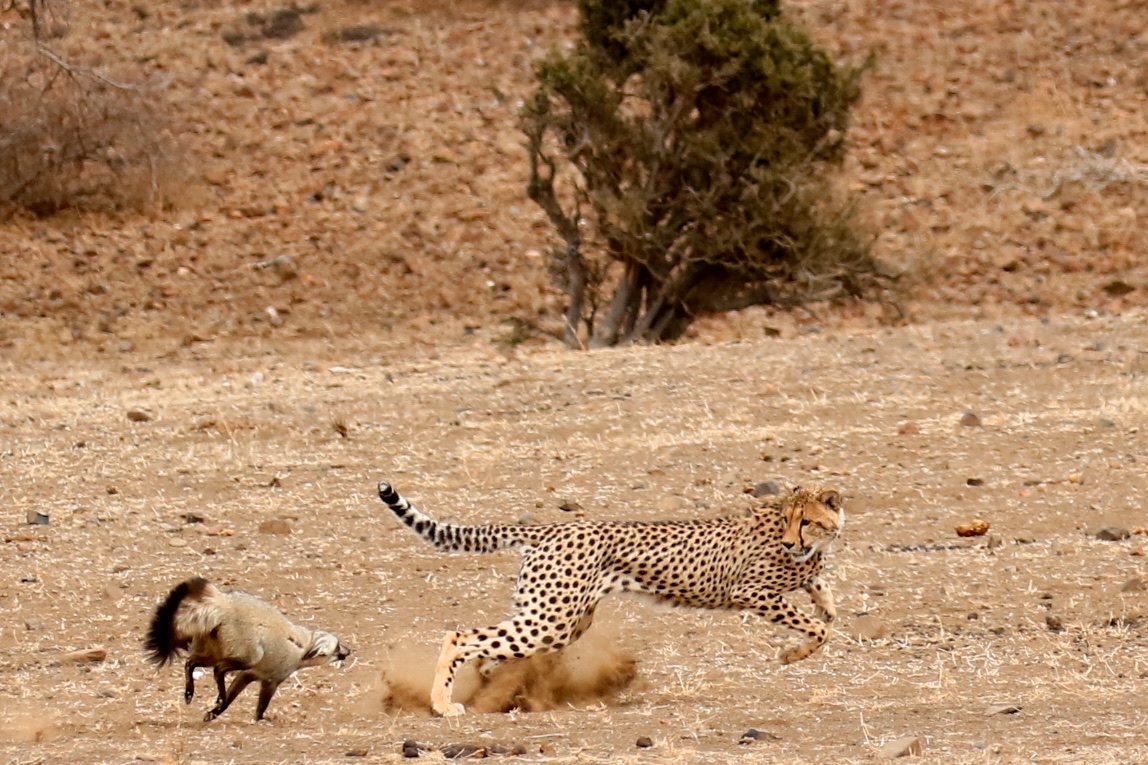 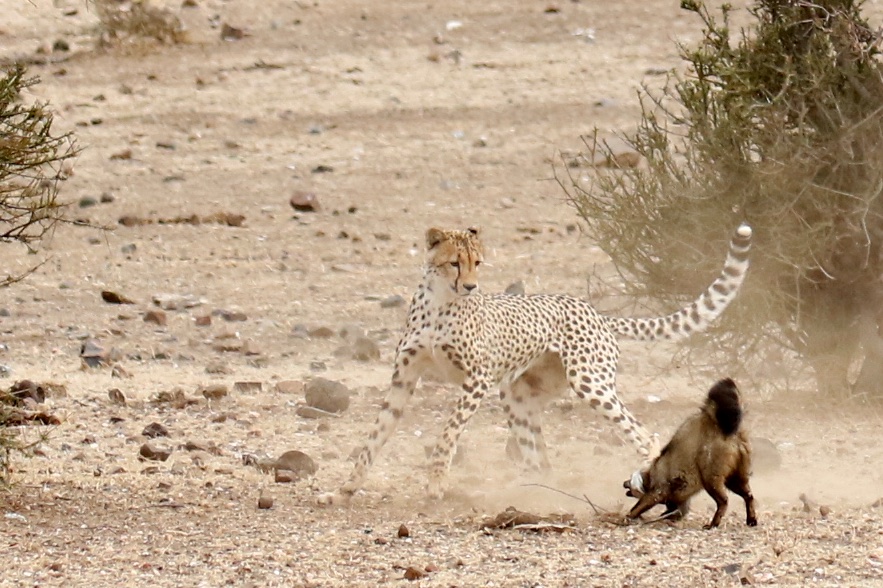 With the foxes safely tucked away in their hole the cheetahs turned their attention and energy to a black-back jackal and gave chase to it.  They quickly gave up and re-joined their mother who by now had spotted a group of impalas in the distance.  Instantly her posture changed and the cubs followed suit.   As soon as she sped off, so did the cubs.  Cleverly she went in the opposite direction to them and while they tried unsuccessfully to catch an impala, she singled one out and caught it with the skill of an experienced hunter. 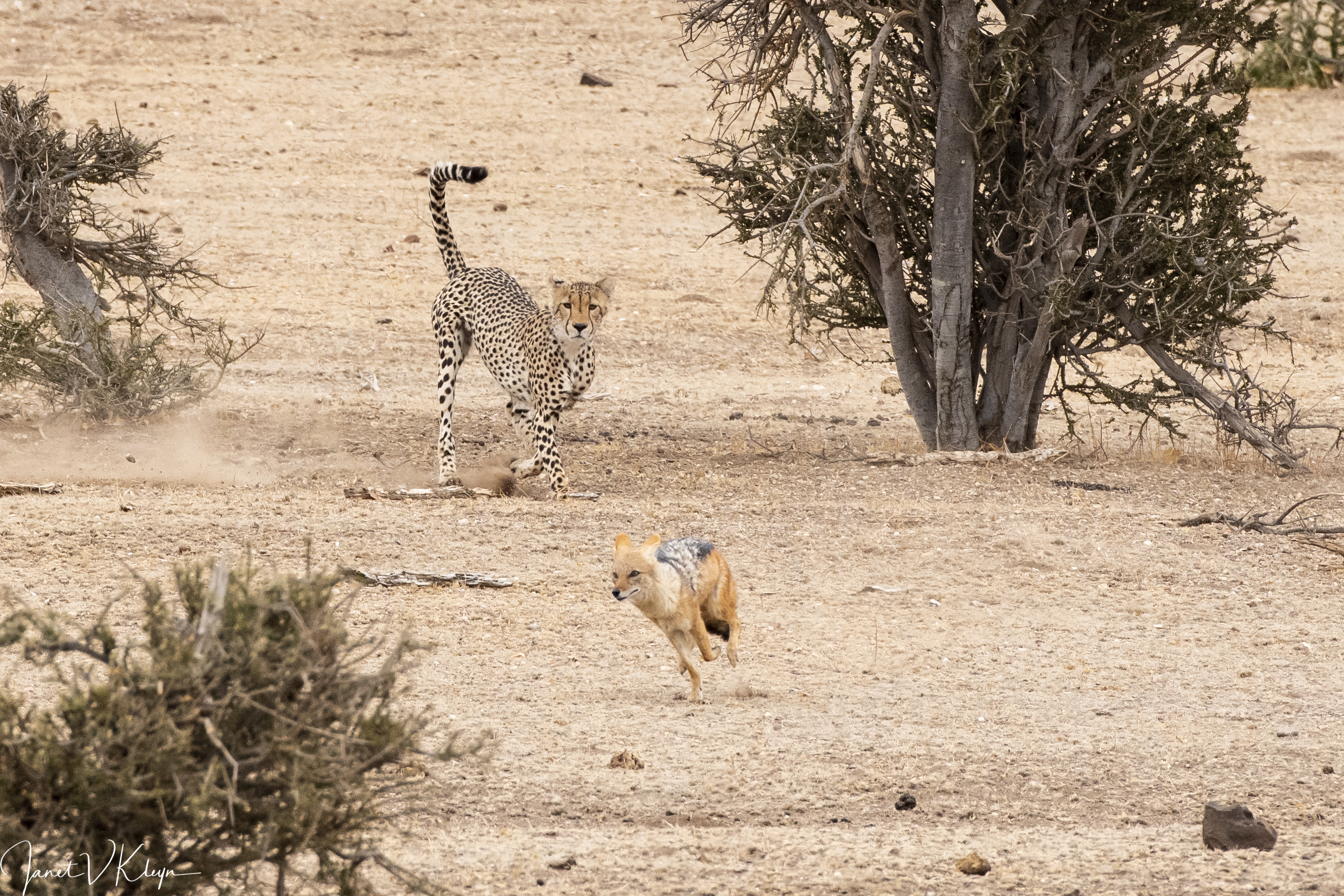 As is the way with cheetah moms, she didn’t instantly kill the impala, but held it until her cubs arrived and then she released it for them to take over.  This is a difficult sighting to watch but a very necessary lesson for the cubs to learn from and gain experience. 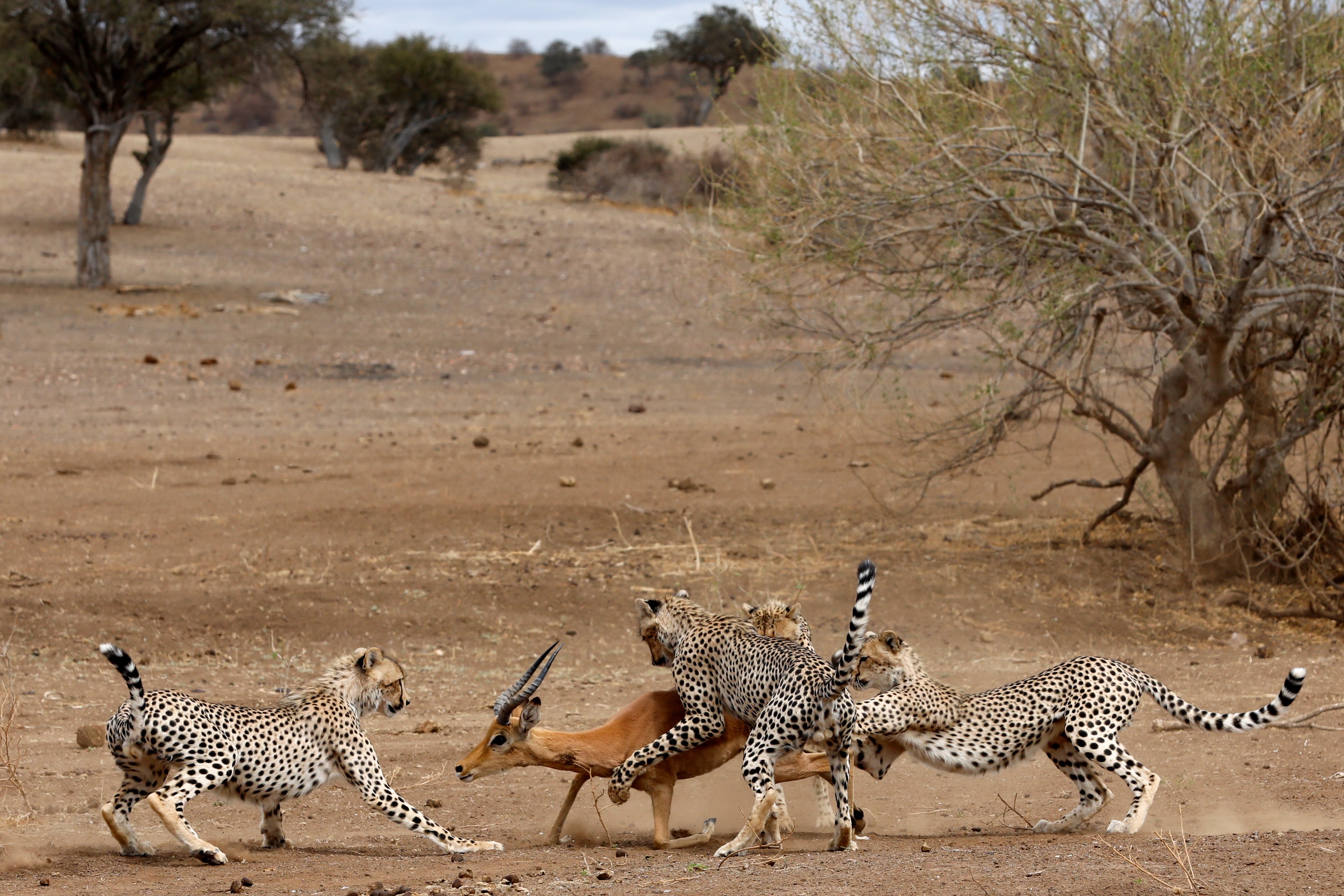 That was all just on day one.  Later in the week, we had a few sightings of  another female cheetah, also with four cubs but younger ones.

We watched as she made a failed attempt at catching an impala, only for her to catch a scrub hare moments later.  It was a small meal and the cubs devoured it in no time while she watched on and never had a bite for herself. 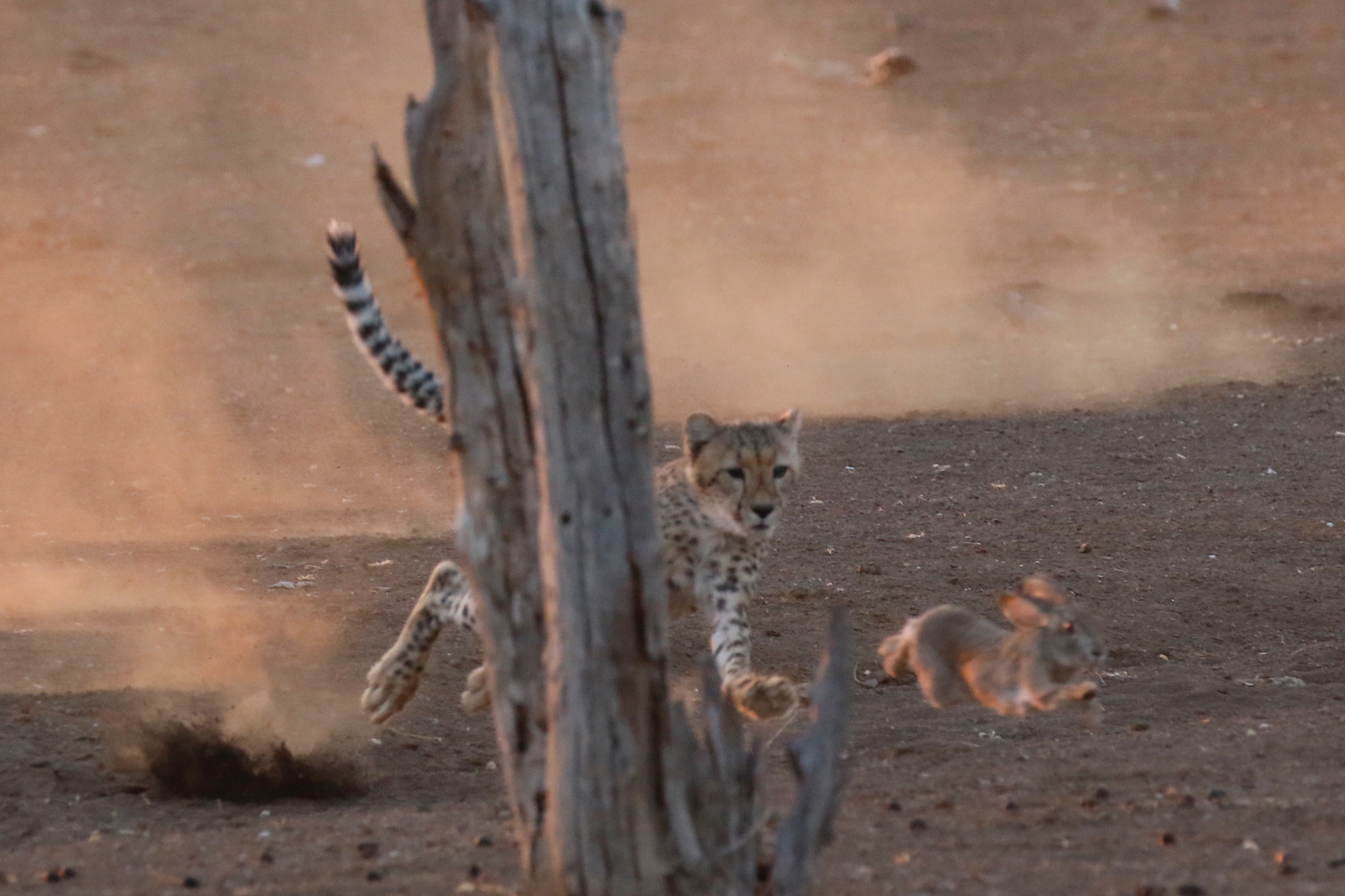 Of course, no photographic safari to Mashatu is complete without a visit to the photographic hide.  On everyone’s wish list for the hide, is elephants and they are frequent visitors to the hide, among many other species.  Cheetahs on the other hand, have only ever been seen at the hide once since opening in 2011.  Imagine our surprise then when the same female cheetah and her four young cubs arrived at the hide.

They strolled in through a cloud of dust and hundreds of guineafowls and slowly approached the water.  In the distance we noticed the elephants coming and so we quickly took some photos, knowing that as soon as the elephants arrived, they would chase the cheetahs away.  We got some great photos just in time and unfortunately the elephants arrived before they drank. 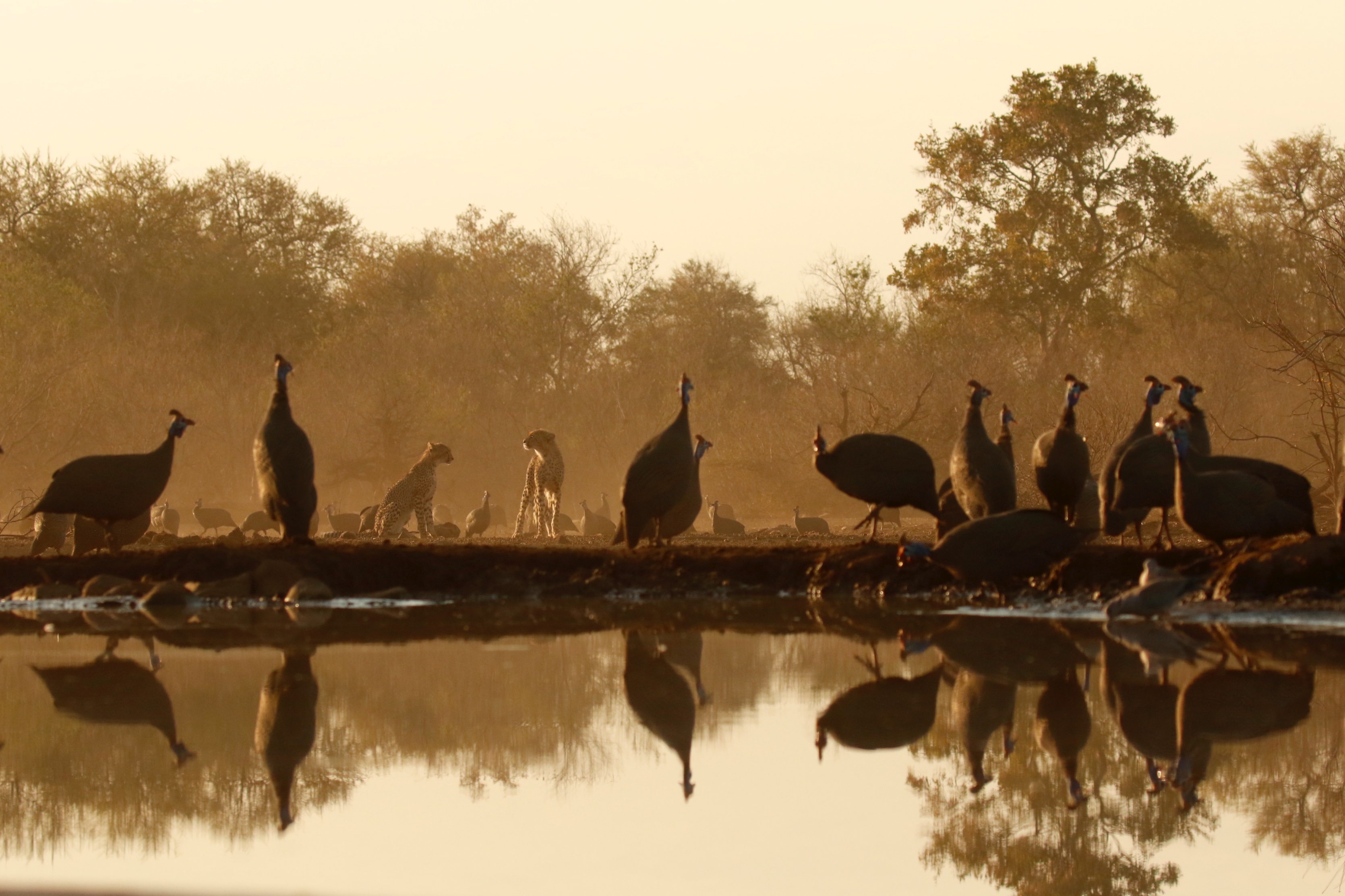 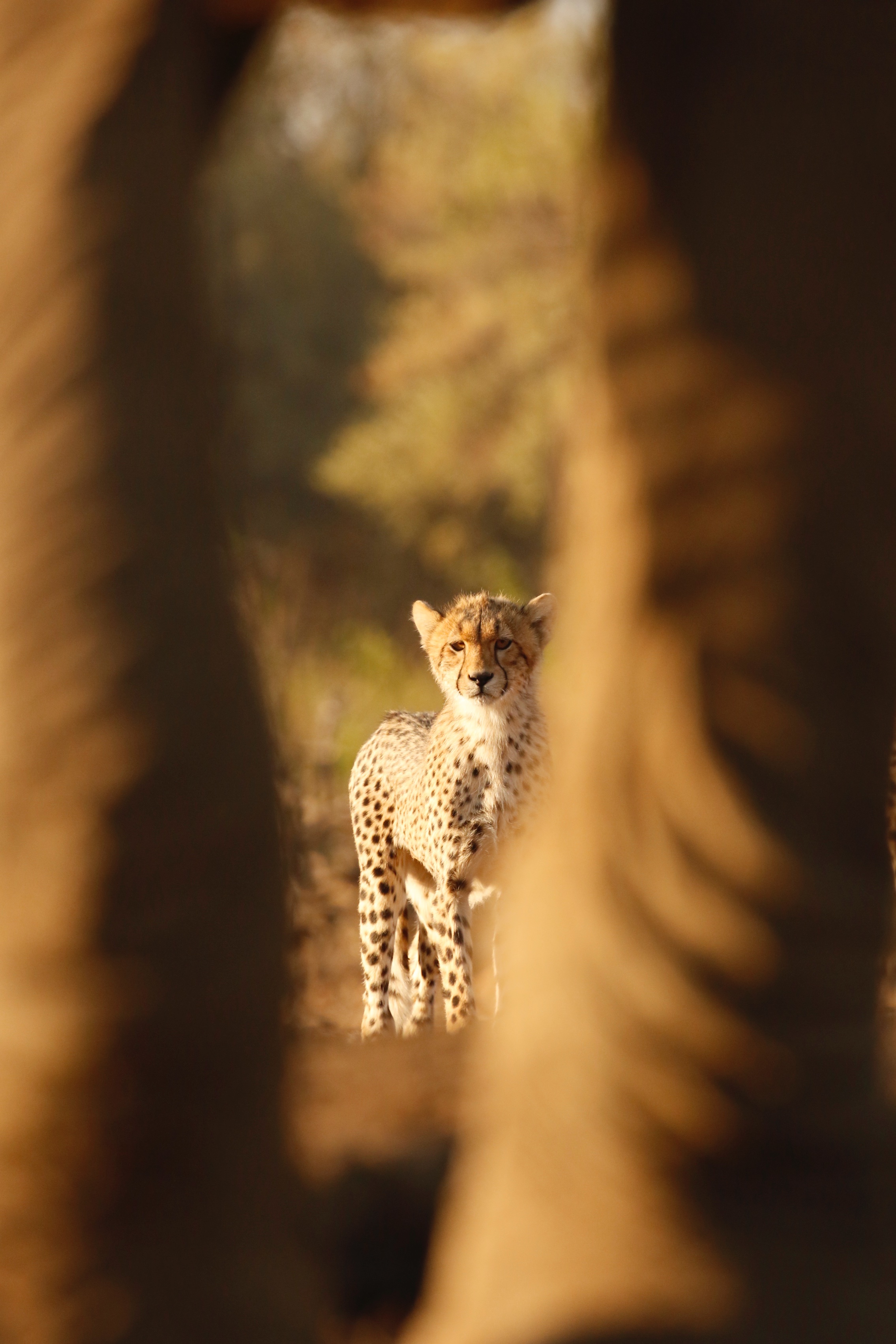 We thought we’d seen it all, but on the last morning drive while tracking a leopard, we again bumped into this family.  They were clearly hungry and looking to hunt.  We spotted an unsuspecting steenbok nearby and quickly positioned ourselves out of the way, but with a good angle to photograph the action.  What we saw surprised us all.  When cubs are that young, they normally don’t get involved in the hunt, but one of the cubs came around into the open and ran straight towards the steenbok, strategically flushing it straight to the mother.  Within seconds the steenbok was taken down by mum.  Just as the cubs moved in to start eating, the ever-present jackals started alarm calling, alerting the cheetahs to potential danger nearby. 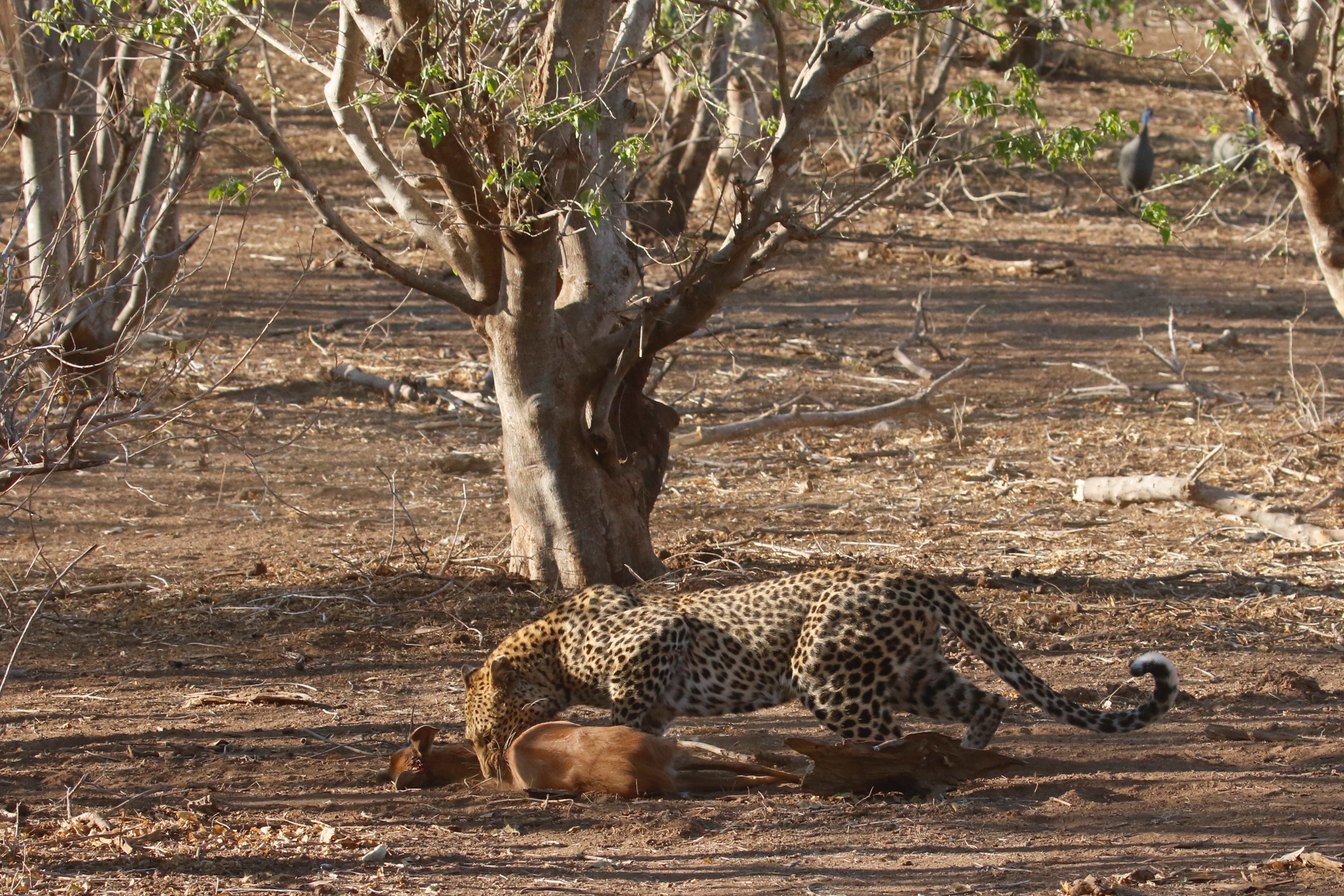 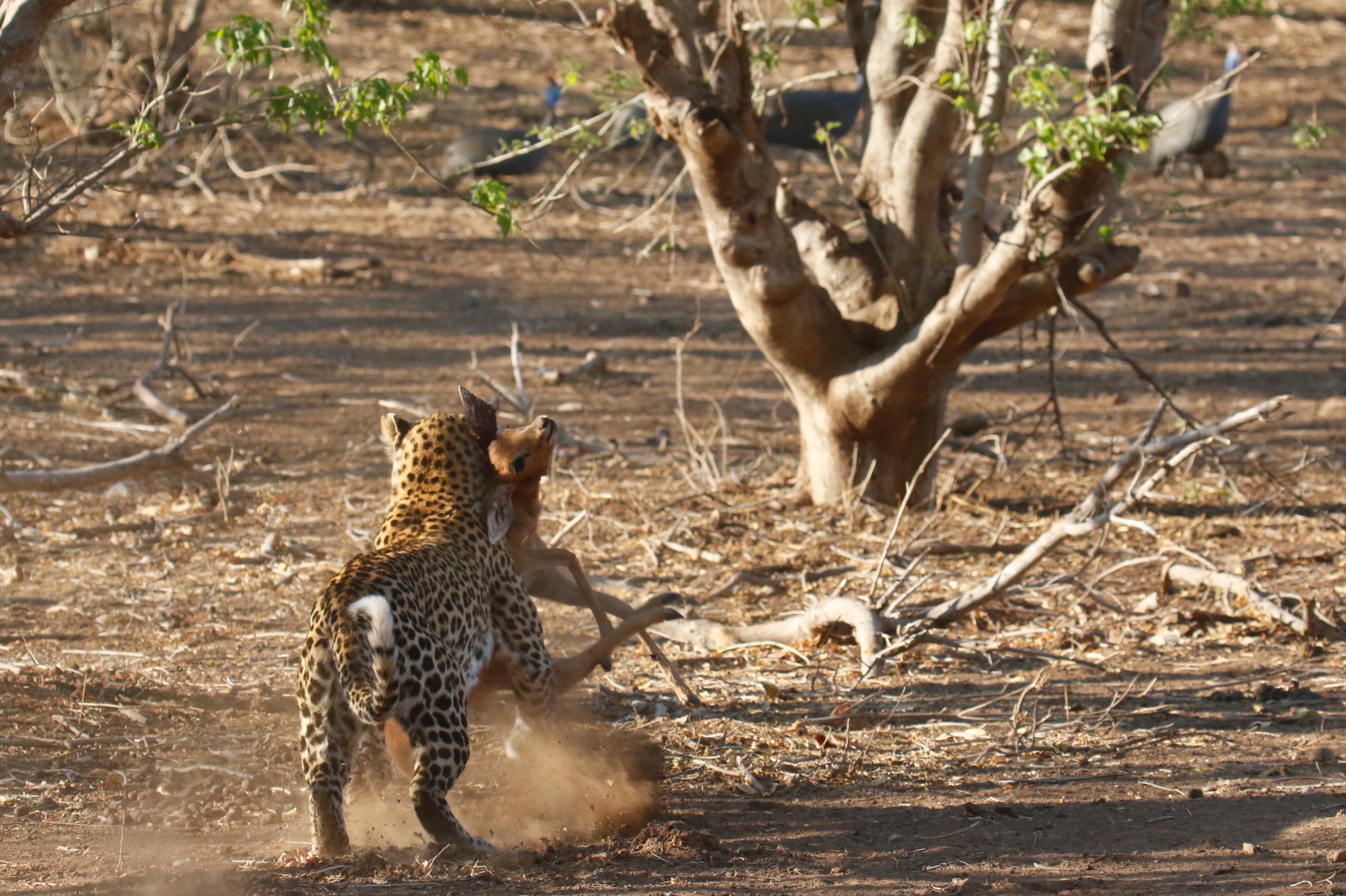 They saw it before we did and turned and ran.  Out of no-where and at a speed of lightning, a leopard ran in past the steenbok towards the cubs.  Our hearts stopped, as the leopard almost caught one of the cubs.  Fortunately, she decided it was not worth it and gave up the chase and went back to steal the kill.

There were many wonderful photographic opportunities for Susanne during the week, but the cheetahs were definitely in the limelight.

Susanne Baden has kindly shared some of her photographs of her week with us for this blog post.  Thank you Susanne.

Text by Janet Kleyn and all pictures copyright Susanne Baden