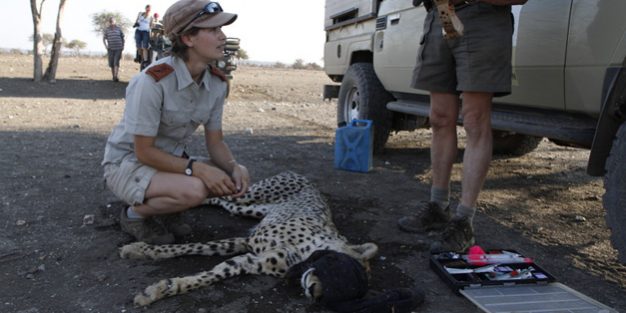 The female cheetah that was collared

The first cheetah in The Northern Tuli Game Reserve has been collared!

The cheetah is a mother with five sub-adult cubs that are about one year old. The family was spotted resting in the shade of a shepherd tree in an open plain; we couldn’t have asked for a better situation.

Data is collected while the cheetah sleeps

The collar is about to be fitted

When the mother was darted she ran off a short distance, and her cubs, completely oblivious to the darting, followed her and lay next to her. Once the anaesthetic had taken effect, we quickly moved in. The collar was fitted and measurements and blood samples were taken, whilst her cubs observed from a distance. She was in good condition and surprised us all by weighing 41.5kg! After the antidote was administered she slowly found her feet, and was shortly joined by her cubs. They all had a sniff at the unfamiliar object around her neck before settling down around her as she recovered from the anaesthesia. She was located and monitored again later that night, and I found the family feeding on a freshly killed impala early the next morning.

The female cheetah with her five sub-adult cubs

Her movements will be monitored over the next couple of years to determine her range use and the size of the area in which she is moving. Additionally, by mapping the telemetry fixes with vegetational and geographical data, we will be able to determine habitat use.

The female cheetah fitted with her collar

A very significant thank you goes out to the relevant parties that donated the satellite collar. Your donation has made a huge contribution to my research – it’s a dream come true! I would also like to thank Dr Erik Verreynne – this operation could not have been possible without your expertise in darting and assisting with the collaring of our cheetah, and I look forward to your participation in future collaring events.