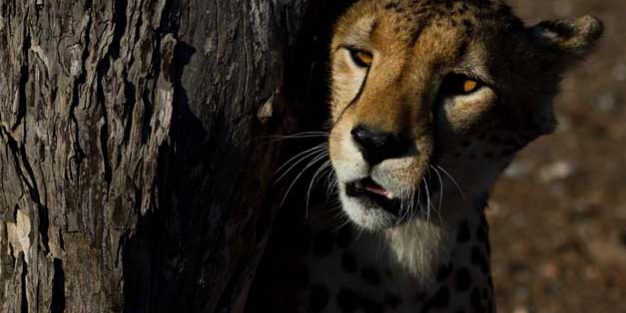 After some well-deserved rain Mashatu is already covered in a shimmer of green new growth. The Mopane trees are a vivid green, a beautiful contrast against the dark brown soil. With the rain also comes cooler weather and predators are active for longer periods during the day.

On a recent Predator Drive the family of six was successfully tracked down. They had just made a kill but unfortunately for them they chose to hunt in an area favoured by spotted hyena and their kill was quickly snatched away. We had the privilege of watching them for the rest of the morning, the young sub adults testing our photographic capabilities by chasing each other at high speed. A young inquisitive female even showed interest in our vehicle and came right up to try out her teeth on our bull bar! Meanwhile the hyenas, in anticipation of a second free meal, followed at a distance. Finally, defeated but not disheartened, the cheetahs moved on to find more suitable hunting ground.

A single female also made an appearance on the eastern border of Mashatu. She appears to be a couple of months pregnant, and we eagerly anticipate the arrival of new cubs! She is very relaxed around vehicle which is great as she is likely to pass on this trait to her cubs.