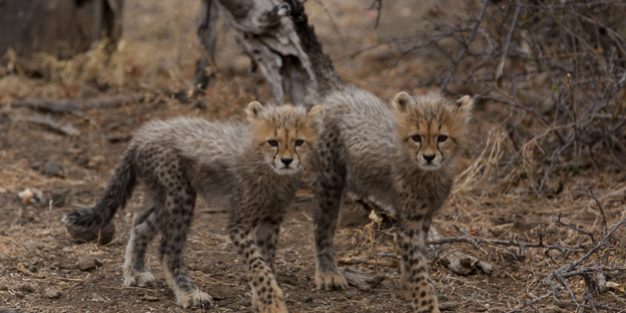 We spent four days at Mashatu, had seen on the webpage the cheetah had five cubs, then four….

we were really hoping she would have at least three till we came. Good for us, all four were still there ! Of last years litter only one of four survived, lets hope this year the survival rate is better ! We so enjoyed the gamedrives , all of them, but these cubs are something special, on three drives ( out of eight ) we saw them, and those were our favourite game drives !

On our first afternoon and very first game drive we saw them, all four, suckling, lying close together, four small balls of fur. Now honest, everybodies heart will melt at the sight of those cubs, even the really tough men on our jeep couldn’t resist, the cubs put a smile on everyones faces. Especially when mum got up and started moving, they didn’t give up quite so fast and tried to keep “hanging on “ but mum knew no mercy and moved on.

The cubs were very inquisitive and were always checking out some tree, bush, butterfly or whatever caught their attention, but in the meantime never left mums side for too long.

The next morning the weather was rather cold, windy and cloudy, but never mind that. As a photographer you want light, but sometimes cloudy days are to your advantage, as was the case today. See, if it had been hot, the cheetah family would have rested under a tree, in the shade, bad for good photos. Today was spectacular, mum was on the move, so the cubs followed. A little cheekier than yesterday, they wandered further off, explored everything that got in their way, raced around like mad, climbed trees and fell down from them, jumped on and over each other.

Then they went for mum, to cuddle, to bite her ear, tail, leg or whatever. To jump on her, over her….poor mum. This cheetah lady is truly a very cool one. It can’t be easy, raising for little ones with only mischief in their minds ! We had a really hard time picking just a few shots, these little whirlwinds are just so cute, and that on almost every photo we took !

On our third day we saw them once more. Mum had finally made a kill, which can’t be easy, leaving four cubs behind, worrying what they are up to, and usually a couple of jeeps on your tail when trying to kill during the day. She’d killed an impala last night, and by the looks of it had eaten her share already, she almost looked pregnant again, her belly blown up to rather  enormous proportions. Now it was time for the cubs to feast on the impala. They tried really hard to look fierce and dangerous but didn’t succeed at all. They just look cute. Eating raw meat at two months is probably a bit early but they were gnawing away at the carcass like mad and when not, well then you can always start biting mums tail or so… do enjoy the photos.

Cubs feeding on an Impala

Cubs and mum with kill

Making the most of their meal

I wish all the people coming to Mashatu in the near future as many good game drives as we had, watch the cubs and fall in love as we did ! We will return for sure, this is such a wonderful place to be!

Thank you and goodbye to everybody at Mashatu !