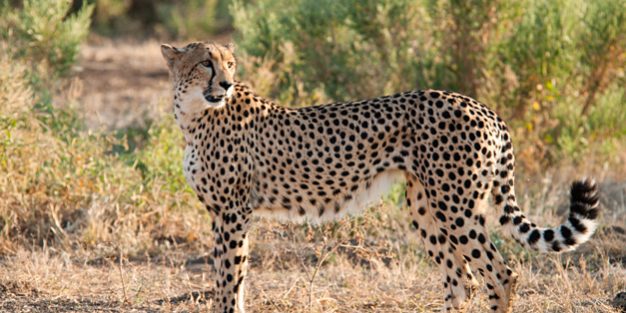 During a fantastic morning out with Mashatu field guide Bashi, we came across a troop of vervet monkeys. It was these vervet monkeys who sat in the top of a Mashatu tree, screaming their lungs out that lead us to a flock of extremely panicked guinea fowls. The flock of guinea fowl fleeing in every direction subsequently lead us to the cheetah cub that was playfully chasing the poor birds as its mother drank near by and absorbed the first light of the day. The mother and cub, full of energy raced up the river bank and through the wild sage – making it a challenging job for the guides to keep up with them.  Often one will find cheetah on top of termite mounds scanning over an area for potential prey. However, much to our amazement on this particular morning they chose a Shepherd tree to scan the horizon, climbing right to the very top branches.

Cheetah cub in the canopy of a Shepherd tree

Mother and cub looking back at the leopard

Just as we began to think that our day couldn’t get any better, our chain of events continued as the cheetah lead us straight towards a leopard. Unbeknown to the cheetah and her cub a young female leopard had been lurking in the bushes behind them. With a higher rank in the natural world, the leopard used its dominance to chase off the two cheetah before relaxing under a near by bush for the day.

Escaping the heat of the day under a bush

From vervet monkey, to guinea fowl, to cheetah, to leopard our morning in the bush became a jam packed chain of exciting events.