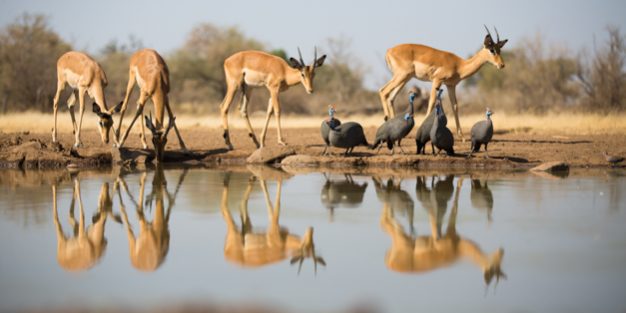 In a region home to around 1500 elephants, it’s unusual to go three days without seeing a single one. As summer gains momentum and there’s less and less water in the veld, multiple herds often stop by for a drink or a splash at the underground hide throughout the day, so that’s exactly where I’ve been – but where are all the elephants?

Have they migrated to Namibia – so long and thanks for all the publicity? Have they all painted their toenails red and hidden in the strawberry jam? Have they been beamed back to the mothership? After three days with no elephants sightings in Mashatu, land of giants, I’m open to all the possibilities.

Thankfully, there’s been more than enough action around the water to distract me from the missing-elephant conundrum. At sunset on Tuesday, a lovely big herd of kudu waltzed in for the last of the golden light, two bulls striking a handsome pose as only kudu bulls can.

On Wednesday morning, an enormous eland bull stopped by, but not without checking us out for an hour and a half first. Back and forth he zigged and zagged in front of the hide until, finally, he strode in for a sip. We named him Rerun.

Thursday morning saw impalas by the dozen streaming in, milling around, and streaming back out while a giraffe, the first we’ve seen from the hide, observed from a lofty distance.

There’ve been a lot of little critters and insects too. Squirrels, a slender mongoose, some beautiful butterflies, and, to the delight of many a bird, loads of miniature toadlets.

Speaking of birds, each day has been a feathery pageant. The show starts with laughing doves and buffalo weavers at first light and continues into the day with sparrows, fork-tailed drongos, grey go-away birds, helmeted guinea fowl, francolins and spurfowl, red-billed oxpeckers, white-crowned shrikes, kurrichane thrushes, Meve’s starlings, tiny blue waxbills and fire finches. The real stars, however, for the extraordinariness of their numbers alone, have been the red-billed quelias. Thousands upon thousands of these tiny chatterboxes roll in from their nearby perches, filling the sky and the quiet with the frantic whir of wings. It’s a dazzling pandemonium, and near impossible to capture on camera. Thankfully, Villiers isn’t as easily intimidated as I am.

Overall, and despite the absent elephants, it’s been an eventful few days. I’m still more than a little baffled by the great disappearing pachyderm act, but Mashatu’s guides assure me they’ll be around again before long. As it is with any hide, it’s all about patience, so I’m off there once more to see what today will bring.

By Tabby Mittins and Villiers Steyn