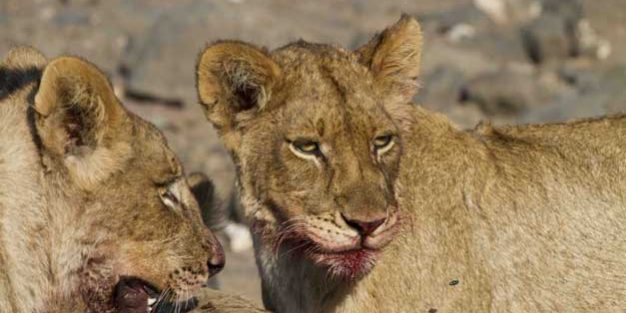 Predators are currently enjoying a veritable feast at Mashatu. In just one week there were seven recorded kills. The lions appear to be targeting eland and kudu at the moment. And from our sightings records, it appears that more than 80% of all eland kills were made in a riverbed. One theory is that the Central pride lionesses are using the thick, soft riverbed sand to their advantage, as chasing down eland bulls in this terrain would almost certainly give the cats the upper hand. Lions were seen 80% of the time during August.

The days are getting progressively warmer. Spring has definitely arrived, with the smells of blossoming Acacia trees, Stink-sheppard bushes and Wild sage filling the air. Bird life is once again abounding as many more species of birds are being seen and heard in the area.

Leopard sightings are still frequent and spectacular. Leopards were seen 74% of the time on drives during the month. The female and her three cubs were seen nearly everyday, and on one afternoon in particular guests had the opportunity of watching this expert hunter in action. An unsuspecting impala ram was standing in the shade of an Apple-leaf tree, with the nearest cover only 30m away. We were absolutely stunned to see how quickly this female leopard covered the open ground and positioned herself behind the thick trunk of the tree. In a flash the female dashed out from her hiding spot, but unfortunately the impala’s highly explosive jumping power saved it from certain death. One high jump was all it took for the impala to avert the razor sharp claws. The leopard was still trying to recover her angle on the attack when the lucky buck made its get away. For now…

Cheetah sightings weren’t that great this month. We saw the female once with an impala kill, and the three brothers only showed face twice in August.

Hyena and jackal by Andrei Snyman

We heard the clan of spotted hyenas that hangs around close to Main Camp every night, as they make their way around the Majale River. Including their newborn pups, the group now totals 15.