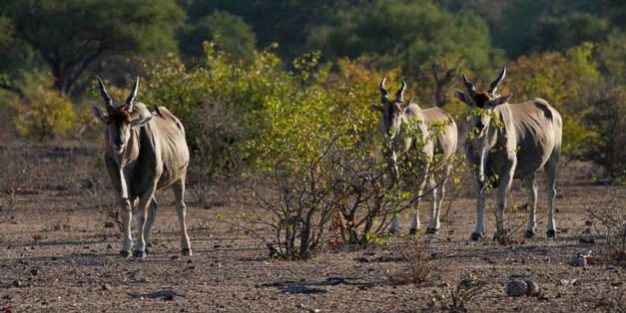 If I had to only show pictures of this area, without the reader knowing what date or season the pictures were taken in, most people will think they had been taken in August, September or even October. The conditions in the whole of the region are looking dry and bleak for most general game. Some consider current conditions to be similar to the severe drought that hit in 1983. Zebra and wildebeest are moving around the reserve, looking for the last remaining grazing areas, while kudu, eland and impala are still to be found scattered across the landscape. The latter species are all browsers, while impala are classified as mixed-feeders since they browse and graze. Eland and kudu bulls typically lose condition at the end of a dry season, and from recent pictures it is evident that the eland bulls are already displaying signs now, which is cause for concern! Elephants seem to be everywhere, and guests at Main Camp often have the pleasure of enjoying brunch while watching a herd at the local waterhole at the camp.

Elephants in front of Main Camp by Andrei Snyman

High concentrations of game can be found in the riverbeds, where there is still a green ‘flush’ of feeding resources available. Most riverbeds have dried up, and only certain pockets with water can be found – this is always a good spot to look for predators!

Even though general game sightings have dropped, predator sightings are excellent! Leopard sightings were recorded as 87% for April, with eight different leopards seen frequently. This is great since these cats were only from the Central area, where most of the game drives take place. Cheetah and lion sightings for April were 57% and 67% respectively, and the resident wild dog pack was also seen on a couple of occasions.

The wild dog pack, still consisting of seven dogs (3 adults and 4 sub-adults), was mostly seen close to Main Camp in the Majale River. The movement of the dogs is simply astonishing. From the radio collar data, we calculated that the average distance between resting locations was 6.55 km, and the maximum distance moved (in a straight line, so the true distance should be more!) was 26.23 km! So to see them is always a bonus. At the end of April the dogs were seen moving through the area as usual, and had just killed an impala ram. Guests were watching the pack of dogs feed, when a spotted hyena – coming from a nearby den – made the mistake of following her nose to this particular kill. What followed was pain and agony for the poor hyena. The dogs all immediately left their kill and started harassing the hyena – biting and pulling on her backside! As soon as the hyena span round to launch at one dog biting her, the next dog behind her would do the same! Eventually the hyena ran for one of the game drive vehicles, and hid underneath it! As soon as the coast was clear, it then ran for the cover of a nearby bush and didn’t come out until the dogs had finished their meal.

The lionesses all seem to be either a heavily pregnant or have just given birth. Two different sets of litters, one of three cubs and another of two, have been seen in just one week! We came across a strange sight one afternoon, when two lionesses were found at a freshly killed impala – along with two tiny cubs! We are not sure what the cubs were doing there, since they are far too young to be eating meat, and are usually hidden away in a thicket or protective shelter of some sort. While the one cub got temporally stuck, head first, under the remains of the carcass, the other one was walking around screaming his lungs out for his mother, who was lying closely watching the whole scene – along with guests! For the past few days we have not see the female and her cubs, so perhaps she has now taken them to a secure place.

All in all, a very productive and rewarding month for game viewing at Mashatu.