An Afternoon With Mom & 4 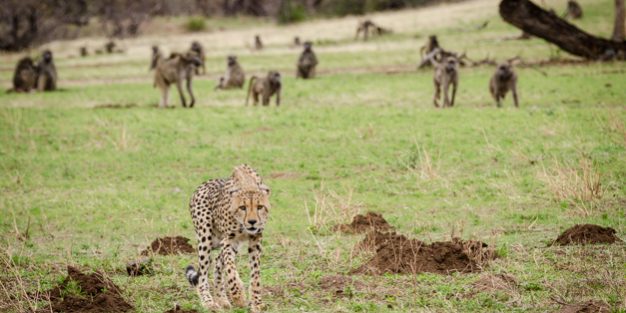 Making our way out into the bush we heard a loud deep bark from a distance over the sound of our humming engine. We turned off the ignition and sat for a minute hoping to locate the direction of where the sound came from, but we did not hear it again. So along we went on our way, across the Majali River, up the bank, through the riverine thicket, over the open areas and slap bang into a troop of very restless baboons. On a closer inspection, we spotted the 4 cheetah cubs and their mom dotted in between the spread of baboons. The baboons where attacking the cheetah with aggressive intent, teeth bearing and all, thankfully our beloved coalition of cheetah (being cheetah after all) managed to out run the extremely upset troop and darted off across the Majali river to safety. Once in safe distance from the angry baboons, the cubs started to play with one another as per usual as if this whole scene of chaos had never happened.

The interaction between the cheetah and the baboons gave me some perspective as to how aggressive and dominant a baboon can actually be. At stages during the confrontation the cheetah’s became submissive towards the baboons, which make me think that if it weren’t for  the sheer speed of the cheetah perhaps our day would have ended up quite differently.

One cub, being followed by a scheming troop of baboons

A narrow escape, but unscathed

The cubs move stealthy along a drainage line, to disguise themselves from the impala

Text and Photographer by: Ruth Nussbaum

The Northern Tuli Cheetah Project
October 15, 2012
Our Latest Wildlife Posts
Go to Top
This website uses cookies to improve your experience. We'll assume you're ok with this, but you can opt-out if you wish.
Cookie SettingsAccept All
Manage consent