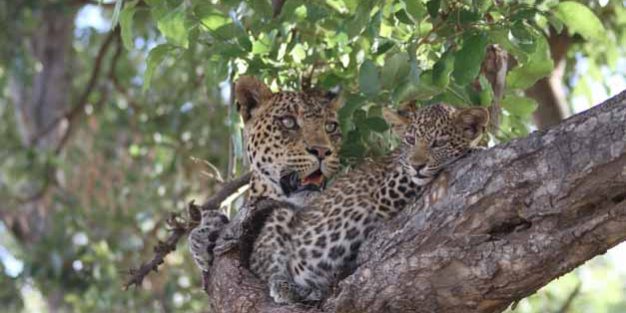 The leopard cub in a tree – Julian & Annie Roelant

On the morning of January 7th, ranger Bashi and his guests – regulars from Italy – had a nice sighting of a mother leopard and her small two month old cub. Later that evening they returned to the area in the hope of having another glimpse. The scene had dramatically changed, however. The mother was found again in a tree, but there was no sign of the young one. Below the mother, a pride of lions lounged in the shade. The group consisted of two females – sisters who are excellent hunters – and their five big cubs. The cubs are from two different litters, separated by just a few weeks. Although they still have their spots, the lion cubs nearing 6 months of age would easily dwarf the leopard cub. Speculation began to rise as the leopard cub seemed to be missing.

The leopard mother stares off into the distance – Julian & Annie Roelant

Then the mother leopard moved in the tree, and with an intense and uneasy gaze, she stared off into the distance, followed shortly by the lion pride coming to their feet. The group moved quickly in the direction of the mother’s gaze. Tension filled the game vehicle – could the lions have seen the young leopard cub? Then suddenly, the young cub emerged from the brush to the side. The lions had passed by, and the young one began to run at full speed, but not in the direction of its mother. We spotted the tiny little cat in full speed trying to catch up and join the lion pride!

The lion pride on the move – Julian & Annie Roelant

The cub emerging from the bush – Julian & Annie Roelant

The leopard cub dashes after the lions – Julian & Annie Roelant

Perhaps the cub was looking for its mother or thought these lion cubs were potential play mates, but regardless of his motive, concern grew at the question of what the lions would do when confronted with the tiny tag-along. The leopard cub’s mother remained in the tree, unable to emerge without exposing herself and her cub. Helplessly she looked on. Soon the distance between the lion pride and the cub expanded and the lions, who seemingly had not noticed the little one, were now sitting at the base of a nearby tree. The cub watched the lions disappearing into the bush as his mother watched him from her perch. A sense of relief washed over everyone in the game drive vehicle. They drove off, satisfied that the mother and her little cub were safely reunited.

The leopard cub underneath the tree – Julian & Annie Roelant

Several days later the two mothers in the lion pride met up with their own mother and another female who had a group of six new lion cubs. The group of four females and 11 cubs stayed together for several days. Then one day, the eldest female and the other mother were gone. The sister lions were now caring for all eleven cubs in three different age groups. Rains began as we moved into mid January. Then a second rain event brought an immense flood. Road conditions prevented safely accessing the habitat where the lions had last been seen. Now in the quiet aftermath of the deluge, the roads have dried, and the land is sprinkled with water pools and bursting with colour. It is a relief to report that on a recent game drive, the whole pride; the two sister/mothers and their group of eleven cubs have been seen together and they are safe.

Special thanks to our guests, the Roelants, for sharing their photos included here.

In next weeks blog we will look at the month in review and examine the flood more closely. Until next time, good tidings from Mashatu.