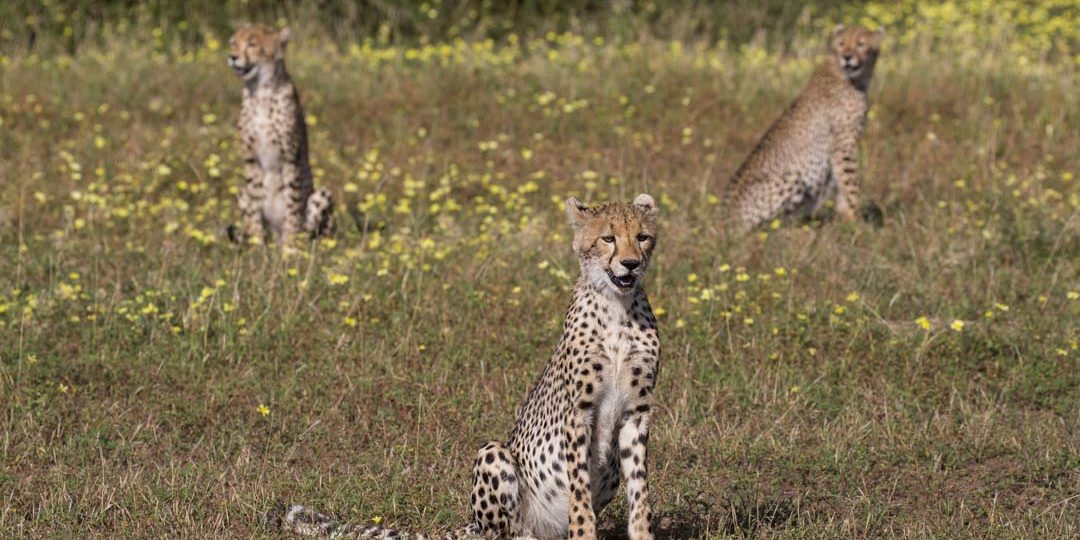 After spending time photographing two female lionesses and a large male lion, we started heading home. It was the hottest part of the day and the females had retreated to the shade of a shepherd tree for a nap while the male took cover in the Crotons about a hundred meters away.

Within a short distance, we came across a female cheetah and her three cubs, heading in the direction of the Lions. We followed them for a while and when they stopped for a drink of water, I breathed a sigh of relief, assuming they were going to rest and stay well away from the danger up ahead. But that was not to be. They continued walking straight toward the lions.

Not wanting to bring attention to them, we left and positioned ourselves nearby the lionesses with a good view, hoping that the cheetah and her cubs would change their course of direction.

With dread we watched as they approached to within twenty meters of the sleeping lionesses, oblivious to the danger that lay ahead. Finally the mother spotted them and instantly stopped and snarled, waking them from their slumber.

Chaos ensued as the three cubs ran off in one direction and mom in another. We made a quick decision to follow the mother who was easily outrunning the one lioness that went after her. The other was in pursuit of the cubs.

As soon as the cheetah gained enough ground, she would stop and stand in the open, taunting the lioness into chasing her again. It wasn’t long before the other lioness arrived to give support to her sister. We weren’t sure what happened to the cubs but the fact that she had left them so soon gave us hope, although in the back of our heads we couldn’t forget that the big male lion was still in the area.

Mom continued her game of cat and mouse with the lionesses drawing them further and further away from her cubs. Once there was a good distance between them she took cover in some Mopani scrub. The lionesses lost sight of her and exhausted from the chase gave up.

We quickly made our way back to go check on the cubs and found them sitting out in the open looking in all directions for mom, but not uttering a sound. Fortunately there was no sign of the male lion. We sat with the young ones for a while before they moved off and took shelter under a bush.

Unfortunately our time had run out and we had to leave. It was only once we were back at camp that we heard the rest of the story that unfolded.   The mother eventually made her way back to her cubs and reunited with them, but it was only moments later that the big male lion charged out of the bushes towards them. Once again she used the same tactic to draw him away. Once there was a safe distance between him and the cubs she quietly disappeared into the bushes and then made her way back to her cubs.

A little bit of luck and quick thinking under pressure saved the day for this incredible mother and her three adorable cubs.